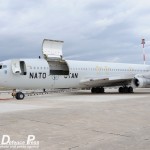 You are reading
Goodbye to an old bird

Thursday 22 December marked the end of an era for NATO’s Airborne Early Warning & Control force. With a flight from it’s home base at Geilenkirchen, Germany to Maastricht/Aachen airport in the Netherlands, NATO said goodbye to the last TCA. The 43 year old Boeing 707 was used as a Training and Cargo Aircraft for the E-3A AWACS force since 1989. The airframe will be partly scrapped and the center wing section used by the Aircraft Competence Center based at the airport.

A week before several defence and aviation journalists and aviation enthusiasts were invited for a farewell flight from it’s home base. The original plan was for a two hours flight but at the last moment the plan changed. So the flight turned into the aircraft’s last operational mission. It would take the crew and guests to FOB Aktion (Prevesa airport) in Greece to deliver aircraft spares.

NATO took delivery of three ex-Sabena 707’s in 1988 and 1989. Dubbed Training and Cargo Aircraft (TCA) the planes were used to train the E-3A pilots and fly freight and passengers at a ratio of two training sorties to one cargo mission. In the 1990’s the situation in the world changed the mission profile of the TCA and more and more cargo missions were flown in support of international operations. In 1995 the planes were fitted with air-to-air refuelling receptacles to better train the AWACS pilots. In 1999 the two oldest TCA’s were replaced by German B-707’s.

More on the operations of the TCA can be read here.

LX-N20199, NATO’s last operational Boeing 707 Trainer Cargo Aircraft (TCA) was decommissioned at Maastricht airport in the Netherlands on December 22nd. It made its last operational flight a week earlier, on December 15th when it flew from its German base at Geilenkirchen to one of NATO’s E-3A Component forward operating bases, Aktion-Preveza in Greece. The TCA Squadron meanwhile stood down on December 9th during a ceremony at its home station.

Three TCA configured Boeing 707s were operated by the NATO Airborne Early Warning & Control (NAEW&C) Force from the late 1980s. Two former German air force Boeing 707s were taken over in 1999 to replace the two oldest TCAs (LX-N19996 and LX-N20198; both were scrapped). For 23 years, the TCA Squadron conducted training, cargo and passenger missions in support of E-3A operations. Recently, 196 sorties were executed in support of NATO’s air campaign over Libya, Operation Unified Protector. On numerous occasions, TCAs were also tasked to fly humanitarian aid to countries like Bosnia, Pakistan and Haiti or to other areas around the globe which had been struck by disaster.

The drawdown of the TCA fleet commenced on August 9th, 2010 when LX-N19997 (former Luftwaffe 10+01) was flown out to Davis-Monthan AFB in Arizona to be stored at the Aircraft Maintenance and Regeneration Center (AMARC). LX-N20000 (former 10+04) was transferred to Manching-Ingolstadt on September 26th, 2011 and is now in use with the Wehrtechnische Dienststelle 61 (WTD61) to train apprentice aircraft technicians at this Luftwaffe test facility.

Dutch company AELS (Aircraft End-of-Life Solutions) will disassemble the last original B707 TCA at Maastricht. Its centre fuselage, left wing and a main landing gear strut will be retained at the Aviation Competence Centre of the Maastricht Maintenance Boulevard for ground instructional purposes.

Meanwhile, the E-3A fleet itself will undergo a thorough cockpit upgrade. An Engineering & Manufacturing Development contract was awarded to Boeing on November 15th by NAPMA. The delivery of the first upgraded aircraft is expected in 2015.