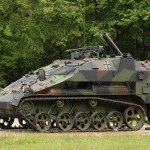 You are reading
Combating terrorism: Rheinmetall wins â‚¬54 million order to equip the Bundeswehr with an advanced mortar system

Rheinmetall AG of Düsseldorf has just been awarded a €54 million contract to equip the German armed forces with a state-of-the-art mortar system. The system’s newly developed 120mm mortar track and associated support vehicles make an important contribution to the mission-oriented modernization of the Bundeswehr armoury. This important order encompasses eight Wiesel 2 (weasel) vehicles, each of which is armed with a 120mm mortar (lePzMrs). An option exists for an additional two vehicles
configured for a command and control role, and worth some €7.5 million. Delivery is slated to take place in 2011.

Combining impressive firepower with advanced command and control technology, Rheinmetall’s highly mobile Mortar Combat System significantly enhances the Bundeswehr’s combat effectiveness, enabling it to respond to new threats in situations where it has hitherto often lacked the necessary capabilities. On the international plane, this state-of-the-art system places the Bundeswehr on the global cutting edge.
Based on Rheinmetall’s tried-and-tested Wiesel 2 lightweight tracked armoured vehicle, various configurations of which have already been successfully fielded, the air-portable Mortar Combat System is specially designed to support infantry and airmobile operations in scenarios where protection is required. It supersedes obsolete, manually operated Tampella-type mortars, which have long since ceased to meet today’s operational needs. Furthermore, some existing stocks of mortar ammunition are now
over 25 years old, and thus no longer authorized for use.

The vehicles just ordered constitute a mortar platoon which will be used to support ongoing operations in Afghanistan. In particular, the system is expected to play an important role in countering asymmetric threats to Bundeswehr bases and convoys in this challenging area of operation. Thanks to its enhanced range, heightened precision and optimized lethality, the system also lends itself to operations in difficult terrain and in urban areas.
The complete Mortar Combat System can be airlifted in a CH-53 cargo helicopter or Transall C 160. Rugged yet flexible, it is designed to deliver maximum mobility even in tough terrain, as well as substantially increasing the firepower, combat effectiveness and accuracy of units deployed in harm’s way.
Force protection also features more prominently than in previous systems: the Wiesel 2 provides its 3-man crew with effective protection against ballistic threats and NBC agents.

Fast and flexible, the Mortar Combat System is able to respond very quickly to emerging threats even in a constantly shifting operating environment, aided by efficient and effective use of newly developed, enhanced range, high-precision mortar ammunition. The system is ready for action just 60 seconds after breaking cover, and can fire up to three rounds in less than 20 seconds. Moreover, since the lePzMrs mortar track can evacuate its fire position approximately 15 seconds after completing a fire mission, it is able to take cover before the rounds it has fired have reached the enemy position. This kind of â€œhide, hit, run, hide” tactic makes enemy reconnaissance much harder, thus adding to the safety of the soldiers on board the Wiesel 2.
Although the mortar tracks can also be deployed autonomously, one of the most salient characteristics of this ‘system of systems’ is its outstanding networkability with all relevant command echelons. Linking the individual vehicle systems into a unified information network – with a constant exchange of operationally relevant data – enhances the Mortar Combat System’s overall operational effectiveness and ability to react quickly. It all comes down to teamwork: targets are detected and identified, information analyzed and processed, options weighed and fire control data generated;
finally, the lePzMrs Wiesel 2 mortar track goes into action.
Rheinmetall’s new 120mm mortar ammunition can hit targets up to approx. 8,000 metres away, a substantial increase in range; it is also significantly more accurate and effective. The use of terminal phase-guided munitions should lead to a further increase in performance. New smoke/obscurant and infrared illumination rounds are also planned.