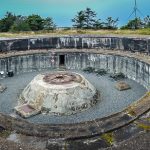 You are reading
Bunkermuseum Hanstholm Denmark

During World War 2 the Germans build massive defensive works all along the coastline from northern Norway to the Pyrenees. A big effort to stop the allied forces from invading Germany and the occupied territories. In Denmark and Norway the Germans made a huge effort to stop allied shipping from entering the Skagerrak. Both projects have been turned into museums after the war to tell an interesting story.

The battery to defend the entrance to the Skagerrak was build in 1941 at Denmark’s northwest town of Hanstholm. On the Norwegian side a similar complex was build near Kristiansand. Between these two towns the Skagerrak is roughly 110 kilometers wide. That meant the guns used to cover the sea had to be massive. With a range of over 55 kilometers the cannons chosen to do the job were big 38 cm naval guns. The same ones used on the German battleships Bismarck and Tirpitz. The shells fired weighed between 450 kg and 1000 kg and needed almost as much if not more propellant to fire them at those ranges.

Building the complete battery of four gun-emplacements and supporting and defensive bunkers took a labour force of a 1000 men. Most of these were Danish builders who took the opportunity of a paid job as opposed to lesser paid Danish building jobs or unemployment. Within a year the guns were operational. A big feat as each of the guns is installed in a 2500 M2 bunker which houses not only a ready amount of shells and propellants but also the entire crew.

The museum has two distinct parts. One is the museum building which is build over the entrance tunnel. It has a nice collection of weapons, uniforms and artifacts and explains the building and use of the battery. The other is No 3 emplacement and bunker. The bunker is completely restored and shows what it looked like during the war when the guns were operational. From the way shells and charges were fed to the guns to the living quarters of the crew.

Unfortunately none of the four emplacements have their guns in place. To see what that would look like you would have to go across to the Kristiansand Cannon Museum at Movik Fort. There is however a complete 38cm cannon at the entrance. This particular one was originally build for an upgrade of the battleship Gneisenau but the ship was bombed before that took place. The cannon was than shipped to Denmark to be installed in the Tirpitz emplacement in southern Denmark. After the war it was stored in Germany and eventually displayed at the Bunkermuseum.

A special treat is the partly intact railway line that ferried ammunition and propellant from bunkers across the battery to the four guns. For just 20 Kroner (€3) you can ride the train through emplacement 4 and an ammunition bunker. The museum is just 100 Kroner (€13) for adults. If you fancy a walk around the vast complex of Battery Hanstholm II, there are four clearly marked walks. Each will bring you to a different section of the complex and guides you past several bunkers. Most of them can be entered but bring a flashlight and wear waterproof shoes. Enter them at your own risk.

The museum can be found at Molevej 29 7730 Hanstholm in Denmark. Vist the museum website at www.museumscenterhanstholm.dk

“NBC sniffer” at pole position, NBC Fuchs is getting a makeover

okt 17th, 2005
Only fourteen years ago, as the Berlin Wall fell, the world applauded as the threat of global annihilation...