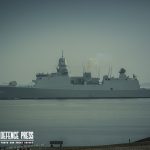 You are reading
LCF, Dutch pride at sea

Effective anti-air warfare (AAW) capability is an essential enabling function for any naval expeditionary force projecting power at long range. Dedicated AAW escorts form a major component of this capability by virtue of their combat system attributes, notably long-range air surveillance, aircraft control, force defence jamming and area-wide air defence. “GDR” offer you a glimpse at one type of this new breed of frigates, solely designed by the RNLN (Royal Netherlands Navy) in close consulting with the Royal Schelde Shipbuilding Company in Flushing and designated as LCF (Luchtverdedegings en Commando Fregat). Actually, the name ‘Frigate’ is a misnomer: With a displacement of 6,400 tons, the LCF is a destroyer in all but name.

In 1995, a contract was signed for the construction of two LCF’s. Primarily the LCF will provide local area defence of merchant vessels in consort or an amphibious task group establishing a presence ashore against anti-ship missiles (diving, cruise, sea-skimming, supersonic) incoming from any direction, in all weather conditions and in a severe electronic warfare environment, as well as aircraft attacks. With secondary functions to provide, that same task group with dedicated C4I facilities, anti-surface warfare/naval fire support, and anti-submarine warfare. In 1996, two more ships were added to the contract, the latter are equal in appearance but lack dedicated C4I facilities. However, they are fully provisioned for. These frigates are part of the ‘trilateral frigate co-operation’, between the Spanish Armada, the German Marine and the RNLN. From the Dutch point of view, the total budget for the four new frigates is € 1.538,1 Million. Like today’s general trend, these ships have extensive stealth features designed into them.

‘Thales’, in Hengelo the Netherlands, designed and build the AAW system for the LCF, which is combined in the ‘SEWACO X’ (Sensors, Weapon and Command) information management system. One of the most advanced of its kind; it features the APAR (Active Phased Array Radar) system, designed by Thales, in close cooperation with the German and Canadian industry. Although smaller, it’s considerably more powerful, than the American ‘Aegis’ SPY-1 phased array radar. Tracking up to 250 targets at one time, it can simultaneously function as illumination radar for up to 16 simultaneous engagements and 30 SM-2 and ESSM missiles in the air. Thales also supplies the long-range air search and early warning radar, the SMART-L. Its ADT track file can carry up to 1000 air, 40 surface and 32 jammer tracks simultaneously. It is integrated with the ‘Scout’ radar for surface surveillance. Mounted above the APAR, at the very top of the ship is a long-range dual band IR surveillance system, called Sirius. This can carry over 500 tracks and provides automatic alerts on the 32 most threatening tracks. Mounted on that same mast is a combined optical/IR surveillance system, ‘Mirador’. With its main sensor, a 3rd generation Focal Plane Array camera, made by DeIft Signaal Optronics, it’s mainly added to improve target acquisition and recognition during brown water operations. Thomson Racal’s UAT system provides ‘Sabre’, the ESM/ECM sensor on the LCF. It represents one of the most advanced integrated naval EW systems available worldwide.

The LCF is capable of storing and launching an incredible variety of missiles. It has an onboard, ready-to-fire, launch capability of 40 SM-2 block IV or 160 Evolved Sea Sparrow Missiles (ESSM) or any combination thereof in a 40 cell Mk-41 Vertical Launch System (VLS), designed and build by United Defense in the US. The SM-2 Block IV is the developmental stepping-stone to SM-2 Block IVA, the future RNLN TBMD missile. Research is underway to evaluate a naval TBMD capacity by adapting the APAR radar to TBMD tasks. Roughly, € 131 million is set aside for this development and modification. Because of financial constraints, the RNLN works together with the US and German navies. A follow-up MoU for a concluding concept-validation study (TBMD on board of an LCF) is signed with Germany late 1999 and is expected to be finished in 2003, after which a decision on procurement will be made. Recently a Dutch Defence Ministry representative has confirmed that The Hague is considering the possible purchase of US Tomahawk cruise missiles, with conventional warheads, to install aboard the four new LCF frigates. There is a current study regarding the missile purchase, in the context of the Defence Capabilities Initiative (DCI), a plan of the European NATO partners to remedy shortcomings in their military capabilities. The representative said, however, the study is only a ‘feasibility study’ and an order is not being considered yet. For the short-range air defence the LCF carries the ESSM SAM. Using the Mk-25 Quad-Pack, four ESSM can fit in a single Mk-41 VLS cell, dramatically improving magazine capacity. Two 30mm ‘Goalkeeper’ Close-In Weapon Systems (CIWS) safeguard the last line of defence. While it uses separate search and tracking radar’s, the system can search for new targets while it is engaging an existing target to deal with saturation attacks.

For its Anti-Surface Warfare (ASuW) capabilities, it’s equipped with ‘Harpoon block II’ SSM, which is a sea-skimming cruise missile designed for anti-ship use, made by Boeing. This version, incorporate GPS guidance and improved software to enable the use of Harpoon in a littoral environment, and as a land-attack missile. The LCF is also equipped with the Mk-36 ‘SRBOC’, capable of firing Chaff and Flares to confuse and divert incoming missiles. It’s also capable of firing the ‘Nulka’, a rocket propelled decoy. The main gun, an OTOBreda 127 mm/54, is a dual-purpose gun, capable to fire the ERGM guided projectile, should this become available in the future.

For anti-submarine warfare (ASW), it’s fitted with the new STN Atlas Electronik DSQS-24C hull-mounted sonar. The ability to embark two of the recently procured NFH -90 Helicopters, capable of deploying a variety of anti-submarine weapons, and a complete set of passive and active protection measures, will greatly increase this capability. The LCF carries the fixed Mk.32 Mod 9 ASW torpedo tubes, firing the MK-46 Mod 5 torpedo. For torpedo countermeasures it’s equipped with the AN/SLQ-25A, better known as ‘Nixie’.

Alongside with the sensors and weapons systems, the whole communications system is a very important integral part of its combat system. Its integrated communication system can handles simultaneously the exchange of all the information between the users and the systems on board and the users and systems on other ships, aircraft’s or stations on land for either military or civilian purposes. It supports all the links necessary for communications and co-ordinations within and between national and/or international operational task groups/forces.

For survivability reasons, the LCF is sub-divided into seven main compartments, when hit in one, ventilation, fire-control systems, and power will still be available in the other compartments. In order to achieve this all necessary systems have full-sized backups. The LCF is equipped with the latest Integrated Monitoring and Control System (IMCS) available, by Imtech Marine & Industry of the Netherlands and CAE Electronics in Canada. Operators will be advised on actions to be taken during routine operations, but the most important factor of this IMCS will be that operators and managers will be advised on actions during under all thinkable battle and damage situations. While an open architecture concept, allows incorporation of standard software and hardware features such as trending, data logging, and multi-media applications like on-line documentation of all platform systems and shore-based monitoring through a satellite data-link.

Now the first of the class, HNLMS “De Zeven Provinciën”, has entered service, and the second, the HNLMS “Tromp”, is performing sea trials, it is arguably the most advanced ship in this size in the world. The construction of the third LCF, HNLMS “De Ruyter”, is also nearly finished. While the keel of the fourth LCF, HNLMS “Evertsen”, was laid down late 2001. Compare the LCF and its 30 simultaneous engagements to the 3 simultaneous engagements possible with the Guided Missile Frigates it will replace, it becomes rapidly clear that the LCF can simultaneously deal with 10 times as many targets and at about twice the range of the older frigate. Even though the LCF is larger and capable of performing much more tasks, the total crew is reduced from 302 on the Guided Missile Frigate, to a total of 202 on the LCF, thanks to a large extend of automation of most systems.

Goodbye to an old bird