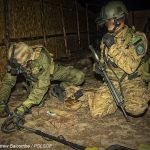 You are reading
Scorpion XIV 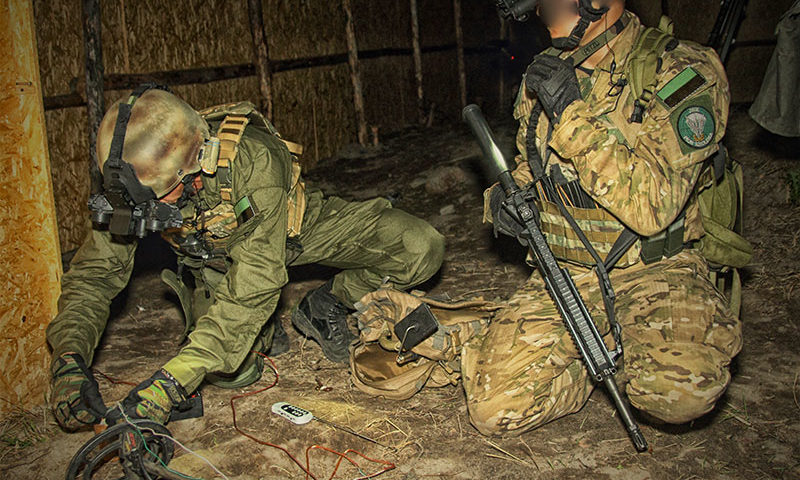 While writing for the US magazine “The Counter Terrorist”, Andrew Balcombe, our Australian friend and regular contributor to Dutch Defence Press, was invited to observe elements of the Polish Special Operations Forces (POLSOF) Scorpion XIV pre-deployment to Afghanistan.

Scorpion XIV was the Polish Commando Group (JWK) pre-deployment exercise for rotation into Taskforce 50 in Afghanistan. The exercise encompassed a number of scenarios the operators are likely to encounter in Afghanistan including high-risk arrest operations at night, ambushes, live fire drills, close air support, artillery coordination, and patrolling. Each scenario is a situation the previous taskforces have encountered.

Intelligence located a suspected insurgent leader in a village in Ghazni province. Taskforce 50 was tasked with arresting him. After the unit finalized its operation plan, the unit commander requested approval from the taskforce commander. Before this can happen, POLSOF command and the ISAF regional command must give the go ahead.

In the command container the intel officer relays information to the commander. The chief of staff provides the commander with situational awareness, such as where each element of his taskforce is, and where adjacent unit personnel are. There are time constraints for planning, but details are still critical. The liaison officer represents the taskforce commander to POLSOFCOM higher command and other taskforces and agencies.

When intel gives the operators the location of the target, a recon unit inserts by catching a ride with a mixed armored patrol of Polish infantry. The recon element confirms the target’s location and set up clandestine observation posts. Operators rotate manning the observation post in shifts, so that the target area is constantly observed.

The command center or ‘controlling element’ uses the recon team’s feedback to update information while all elements of the operation stand ready to act at a moments notice if necessary.

The intel is first examined by the commander and then sent to the operation planners. The recon team at the observation post suggest the best route for approach and provide specific details of the target and environment. The direct action (DA) team uses the recon intel to prepare tactics such as whether they need a roof team and the type of weapons and entry tools necessary. They also use the information to prepare the supporting units, which in this case are elements of the Polish infantry, these will stand in place of the usual Afghan PRC.

Observation has determined who is with the suspect and if there are women and children at the suspect’s house. Female personnel will join the operation to provide searches in order to minimize offence to the locals. Interpreters are informed how they should integrate into the operation. The JWK operators are treating this as a police operation. They consider evidence collection and preservation crucial in order to carry out the process of law.

Before the mission begins, all TF50 combat element participants cram into a small command room. They were observed by evaluators from POLSOFCOM to determine if each of the taskforce’s elements meet the accreditation standards for operational deployment to Afghanistan.

The operators and support staff are told who the suspect is:
A man in charge of 40 fighters who have conducted indirect mortar, 107 mm rocket and small arms fire on FOB Ghazni and IED attacks on local Afghan government personnel. They discuss the enemyâ€™s most dangerous course of action and his most probable course of action when confronted with the DA element. Objectives are set out: capture or kill the suspect, destroy any weapons caches, recover evidence and information and so on.

A replica of an Afghan residential compound surrounded by a wall appears green in night vision goggles. Dark figures move in front of the wall and then disappear behind it. There is the sound of window shutters and doors being forced open with hooligan tools and sledge-hammer

The DA team enters and identifies themselves to the occupants. They then clear each room. A figure appears just behind the compound’s front wall and two more deployed to the roof. After about five minutes a long burst of automatic weapons fire erupts from the building opposite and is answered by the JWK operators HK 416s, M249 Minimi machineguns and 40mm grenade launchers.

The hostile gunmen have been killed but they hit one of the JWK operators in the leg. A medic is tasked to deal with the wounded operator. A quick reaction force with armored personnel carriers (APCs) roll onto the target area with EOD operators and an ambulance APC.

Inside, the compound, a narrow hallway leads to a central living area with two bedrooms branching off from it. Inside, two male occupants are cuffed. Biometric data is taken from them and they are questioned while EOD personnel join other operators to search the compound inside and out for evidence and explosives.

Outside the compound, operators observe the area from different positions. Inside the house a female occupant with a baby sits in one of the bedrooms. She was moved to another area by a female attachment to the team.

The EOD element locates explosives hidden under the floorboards. A simulated explosive charge (flash bang) is placed near the hidden cache and detonated from outside. Inside the courtyard, another explosive cache is discovered hidden in a dog kennel and dealt with in the same manner.

The two males’ separate interviews reveal that they are, in fact, wanted men. They are extracted for a detailed interrogation. The entry team exfiltrates with the recon element in APCs and Humvees with confiscated evidence and intelligence materials. It is a job well done and the JWK operators are certified for deployment in their special operations role. 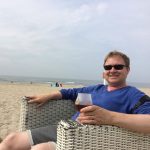