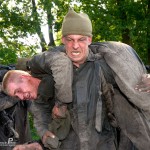 In this day and age training has almost become synonymous with simulation. But for a large number of our soldiers it is still the physical and mental challenges that prepare them for combat. Probably the best example of this are Special Operation Forces (SOF). In the Dutch army that role is performed by the men of the Korps Commandotroepen (Commando Regiment) that traces its history back to the famous commando’s of World War II.

The Dutch Commando Regiment is probably one of the very few SOF units that recruit civilians as well as active duty soldiers. But being an active duty soldier is definitely no guarantee of success. So the percentage of success to actually become a SOF soldier is very low. Over the last few years the Dutch Commando Regiment made big changes to their recruiting efforts to increase the chances of ’recruits’ to make the grade. One thing they did not do was lower the standards in any way. It is still very tough to pass selection.

Inspired by the British army’s Parachute Regiment Inside Course, all candidates must first come to the acquaintance days (Kennismakingsdagen Korps Commandotroepen or KD-KCT). A three day and two night stay at the Regiments tent camp. Here both civilian and military candidates (all ranks need to go through the whole process, including officers) will first be tested on the physical requirements set by the Regiment. These requirements are pretty demanding and the candidate needs to be very fit to pass. Even though candidates declare they meet these standards before coming, around halve of them find themselves back at the train station after a few hours because they fail on one or more physical tests. Testing physical fitness and stamina is not very hard, and instructors from the Regiment’s training company put the candidates through some tough challenges in the three days and two nights. But SOF soldiers also need a good set of brains and a character that fits the needs of the Regiment. A team of special recruiters and psychologists join the instructors to evaluate the candidates. Nothing escapes their attentions and candidates are constantly challenged about their behaviour. For the civilians it is their first glimpse of live in the military and the Regiment in particular. The soldiers are tasked to take the civilians under their wings and help and support. They are also tested separately on soldiering skills.

Candidates get a personal evaluation at the end of the three days. Several outcomes are possible, but coming this far very few are told they will never be able to join the Regiment. More likely candidates will be told to stay in their own unit for some more years and try again later, or for civilians to join another unit first to gain experience. Civilian candidates that pass can now officially apply for the Regiment and go through the official system of recruitment.

The reason for KDSF is to make sure the candidates that make it to selection have at least a good chance to succeed and join the Regiment.

Civilians that pass all the official recruitment tests will now go to the army’s training command to follow the basic training course that lasts seventeen weeks (Algemene Militaire Opleiding or AMO). Like recruits of all other units they will learn military basics and get used to live in the military. There is a difference though. Recruits for the Commando Regiment are in a separate platoon and some of their instructors are from the Regiment. As all the Regiment’s instructors are fully fledged commando’s themselves, this creates a little different atmosphere. At the end the recruits get their initial training certificate. If they do not make the rest of the selection course, they can easily join another unit as they already passed basic training. The recruits now go to the Commando Regiment’s depot in Roosendaal.

Here they will be joined by the military applicants for what is called Pre-training (Vooropleiding or VO). In eight weeks this mixed group of seasoned soldiers and relative newcomers to military life will live and train together. The sole purpose of these eight weeks is to prepare them for the final test, the selection course itself. But this is no picknick in the park at all. The physical demands and mental challenges are great but the candidates are closely watched and coached by their instructors. The candidates are also subjected to the basic skills required of an Dutch SOF soldier. Lots of time is spent on map reading and compass. He will spent most of the eight weeks outdoors exploring the countryside, either in a team or alone. Slowly they are learning the rules that will be enforced during final selection.

At every stage it is possible for the candidates to be declared unfit (physically or mentally) to go on to selection. In a personal evaluation he then hears what the shortcomings are, what he can do about them and what possibilities he has left to choose from.

The real selection course (Elementaire Commando Opleiding or ECO) starts at a Monday morning at the parade ground. Wearing the traditional candidates uniform of green overall, toggle (piece of thick rope with a loop on one side and a peg on the other) but wearing the standard issue beret, they are marched in front of the Commando Regiment’s commander and the whole Regiment. After being wished all the luck the candidates switch their berets to the traditional wool cap. The uniform goes back to the time of World War 2 and the very first commando’s. From this moment on the life of the candidates will be one of uncertainty and their faces reflect that. They will never know what the instructors, all seasoned commando’s themselves, have in store for them. The only thing they do know is that it will be very tough and not all of them will reach the end of the eight week course.

The pressure is applied straight away with a forced march to the ECO’s own small camp in the woods near Roosendaal. This will be the candidates home away from home for the duration of the course. Here they are issued a cot and three blankets. They will live out of their rucksacks and dufflebag with only the items they were allowed to pack. The cot is more of a token, they will spent most of their weekdays outside. Weekends are spent eating and sleeping at home.

On the way the platoon will perform several physical exercises that may seem random to them but serve a distinct purpose. The Regiment wants only those soldiers who are physically up to their standard and mentally stable. When the body collapses under extreme physical pressure, the mind has to take over and spur the body on. The course is set up so that the candidates will experience this more than once. There will not be a let-up in those eight weeks. They will be tired and sleep deprived the entire course.

Food is a very important factor. The candidates will not be hungry most of the time. Modern sports insight led to a change in feeding the candidates. Each morning they will start with a mandatory plate of oatmeal. After that they can eat all they want in bread, cheese and other edibles they get. The calorie intake has to be close to the amount being burned. For a normal man that would be around 2500 calories. For these guys it is closer to 7000 per day. The only time they will really be hungry is during survival week, where they have to fend for themselves and live of the land.

Although most of the course is a closely kept secret, some more prominent parts are well known, at least by the candidates. They would have read or heard about them. But it is one thing to hear how tough it is. You will never know the truth unless you did it yourself. One such item is the speedmarch at Marche les Dames, the Belgian army commando training centre. The hilly terrain makes it extra hard and the candidates have no idea how long the march will be. What they do know is that they will want to give up somewhere along the line. Only those who really want to be SOF soldiers will keep going.

The last week of the course is called the “afmatting” or exhaustion in English. In five days they will travel more than 285 kilometres, mostly on foot. They will do this alone, in buddy pairs, small groups or as a platoon. They are not allowed to have any contact with anyone except their instructors. They will have to show they master the map and compass among other skills they must posses. During the last night of the “afmatting” the will march behind the course commander for the 25 kilometres commanders march. The end is the ‘Gate of Tears’ at the Commando Regiment’s barracks in Roosendaal. Here the survivors are welcomed by family, friends and everyone from the Regiment present.

After a short rest and clean-up the new commando’s will be marched in front of their family, friend and colleagues. During a short ceremony they will throw the despised wool cap to the ground and for the first time put on the Commando Regiment’s distinctive green beret. There is always a special guest together with the Regiment’s commander that gives the candidates their new green beret.

Only after their colleagues have welcomed them by having them drink beer from the berets, are the family and friends allowed to reunite with the fresh commando’s.

Earning the green beret is not the end. It is more the beginning of a new live. For the next year the new commando’s will be training to learn every skill they need to become a SF Operator and join an operational commando company.