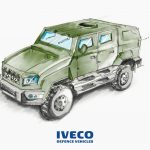 Following the award announced in September 2019, Iveco Defence Vehicles has signed a contract with the Dutch Ministry of Defence to initially provide 918 medium multirole protected vehicles denominated “12kN”.
The signing ceremony was held on November 28, 2019 at the NIDV exhibition in Rotterdam, The Netherlands in the presence of Vice Admiral Arie Jan de Waard, Director of the Defence Material Organization (DMO).

Iveco Defence Vehicles to deliver an additional 26 amphibious platforms to the U.S. Marine Corps in partnership with BAE Systems