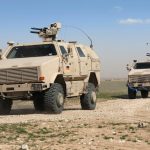 The DINGO 2 has already been successfully tried and tested in numerous international missions, including in Bosnia, Kosovo, Afghanistan and Lebanon. Next to Germany it is also used by Austria, Belgium, Luxemburg and the Czech Republic. The Federal Office of Defence Technology and Procurement (BWB) has now ordered a further 41 of these heavily-protected personnel and material carrier from Krauss-Maffei Wegmann (KMW), which the German Army will deploy in Afghanistan. The leading European manufacturer for protected wheeled and tracked vehicles will deliver the 41 DINGO 2 to the troops even before the end of the year.

Fast delivery
“This short delivery period underlines the flexibility and industrial performance of Krauss-Maffei Wegmann”, says Frank Haun, CEO and Chairman of the Board of KMW.
DINGO 2 considered the best-protected wheeled vehicle
The DINGO 2 is currently considered the best protected wheeled vehicle in the world, and offers its crew of up to eight members what is now the highest level of protection available in its class against modern small arms, artillery shrapnel, anti-personnel and anti-tank mines, improvised explosive devices (IEDs) and against NBC warfare agents. All 41 vehicles are equipped with a light weapons station of the type FLW 100 as defensive weaponry, which, if need be, can carry different sets of armaments (e.g. machines guns). This is operated by remote control by the vehicle crew from inside the protected crew compartment, and can be used with the utmost precision and control even when driving fast through difficult terrain.
The DINGO is available in different mission configurations, including patrol, mobile command post, NBC reconnaissance and armoured ambulance. The protection and safety standards of the DINGO 2 apply to all variants. The all-terrain UNIMOG chassis of the DINGO 2 allows all vehicle configurations to reach a maximum speed of 90km/h and a cruising range of approximately 1,000km. Furthermore, it can be deployed by transport aircraft such as the C-160 Transall, C-130 Hercules and the A400M in all configurations.
Krauss-Maffei Wegmann GmbH & Co. KG leads the European market for armoured wheeled and tracked vehicles. At locations in Germany, Greece, the Netherlands, Singapore and the USA, some 3400 employees manufacture and support a product portfolio ranging from air-transportable, heavily armoured wheeled vehicles (MUNGO, DINGO, GFF4 and BOXER*) through reconnaissance, anti-aircraft and artillery systems (FENNEK, GEPARD, LeFLaSys*, Armoured Howitzer 2000, AGM and DONAR) to heavy battle tanks (LEOPARD

Get more information at Kraus-Maffei Wegmann.