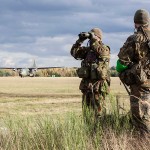 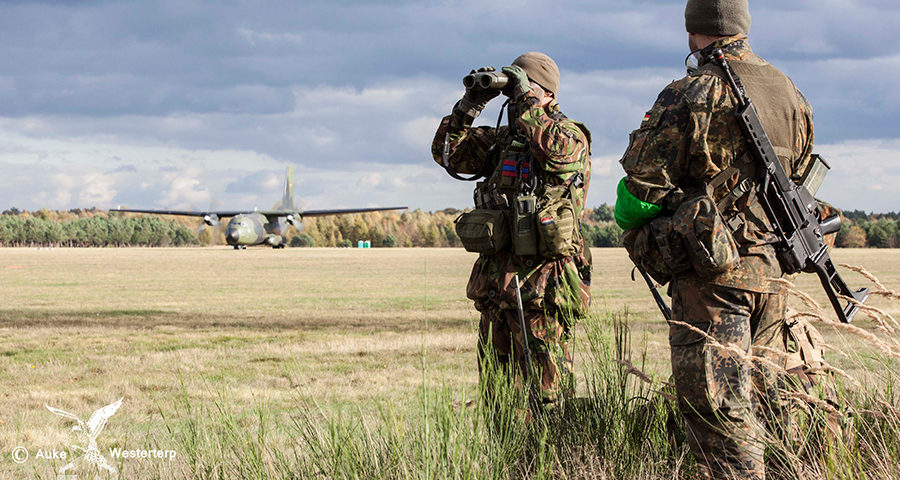 Pieter Bastiaans reports for Dutch Defence Press on the airborne exercise Eisregen II which saw German, Dutch, Belgian and US troops train together in the Altengrabow training area in Eastern Germany. First held in early 2012 by the 373rd Parachute Infantry Battalion, Eisregen is part of a series of exercises which are conducted by Germany’s airborne forces on a regular basis. The latest edition was held from 21 October until 1 November and involved some 1,200 troops. After their recent return from deployment, the Seedorf based paratroopers were eager to get some specific airborne training, having lost some of their unique expertise due to the emphasis on counterinsurgency operations in Afghanistan. Once again, exercise Eisregen did not disappoint its participants as it provided them with a unique training opportunity on how to prepare and execute complex airborne operations as part of an initial entry force.

In addition to the previously mentioned battalion which was the main fighting force during the exercise, Eisregen II also involved other elements from its parent unit, the Oldenburg based 31st Airborne Brigade, such as airborne qualified engineers and combat service support personnel. Illustrating the increasing defence cooperation between Germany and the Netherlands, the Dutch 11th Airmobile Brigade (Air Assault) had also dispatched one of its air assault infantry companies. This unit was attached to the German battalion during the exercise together with elements from the airmobile brigade’s Pathfinder Platoon. Specialists from the latter unit were joined by their German counterparts from the 373rd battalion which in its turn had been reinforced with troops from the pathfinder platoon of its sister battalion, the 313th Parachute Infantry Battalion.

In order to simulate the strategic deployment which normally precedes every expeditionary operation, the German paratroopers were relocated to the army airfield at Celle which is home to part of the German Army Aviation Training School (Heeresfliegerwaffenschule). During the exercise, Celle was used as a so-called aerial port of embarkation (APOE) for a number of C160D Transall transport aircraft which came mainly from the German air force’s 62nd Air Transport Wing at Wunstorf with their colleagues from the 63rd Wing providing additional airlift. A Forward Operating Base (FOB) was also established some time ahead of the main assault in order to accommodate some German and US helicopters which would be used to support various missions. Stationed at Stendal, a former Soviet airbase which used to house a complete regiment (the 440th Independent Combat Helicopter Regiment) of Mi-24s and Mi-8s until 1992, rotary wing forces included a number of CH-53Gs which are administered by the Holzdorf based Air Transport Group of the Luftwaffe’s 64th Helicopter Wing. Also taking part were two Eurocopter Tiger UHT (Unterstützungshubschrauber Tiger) attack helicopters from the German army air corps’ 36th Attack Helicopter Regiment which is based at Fritzlar. Part of the United States Army Europe (USAREUR), the 12th Combat Aviation Brigade (12th CAB) had dispatched one of its Boeing CH-47Fs from the 5th Battalion, 158th Aviation Regiment at Ansbach together with a medevac configured UH-60A.

During the exercise, the full spectrum of air manoeuvre (airmobile/airmechanised/air assault/airborne/ tactical air landing) operations was trained for. Both the German and Dutch pathfinders were inserted into the Altengrabow and Klietz training areas more than 48 hours ahead of the main assault so they could monitor possible enemy action at the objectives while also preparing a series of helicopter landing sites and drop zones in the areas. Meanwhile, on the night preceding the main assault, Tiger attack helicopters conducted airmechanised operations which were aimed at shaping the battlefield. Airborne operations are susceptible to weather conditions and with winds exceeding air drop safety standards on Monday the 28th, it was decided to delay the main assault for 24 hours. The next day the airborne planners were pleased to see that there was no morning fog and they gave the green light for the assault on Altengrabow to commence. Having departed from Celle, the first waves of German airborne infantry were flown into the landing zone which had been established at an improvised airstrip in the training area. With tactical air landing operations (TALO) still ongoing, the paratroopers quickly rendezvoused and then marched in double file towards the defensive positions they would take up. Follow on forces including the Dutch air assault infantry troops were also flown in by C160 to reinforce the airhead which would be used to launch further operations in the days ahead. With aerial resupply being one of Eisregen’s training objectives, heavy loads were airdropped from the ramps of C160s while the CH-53Gs brought in further supplies by means of underslung cargo. Ground based fire support was also thought of with the battalion’s organic mortars quickly being flown in. Strapped as internal cargo in the CH-47F, Mercedes Benz G-Wagon all terrain vehicles provided much needed ground mobility once they were deployed while Wiesel tracked vehicles with 20mm autocannons or TOW (Tube-launched, Optically tracked, Wire-guided) anti-tank missiles were flown in by C160. These air transportable vehicles fanned out in the area and established an outer perimeter, hereby further increasing the footprint of own troops. Friendly casualties were either evacuated by helicopter (UH-60A) or by tactical air transport (C160).

After taking out a command and control facility in the area, both German and Dutch troops conducted a deliberate ground attack on an enemy training camp which was guarded by a limited number of armoured fighting vehicles. An airmobile quick reaction force was flown in by helicopter to give further impetus to the attack and this quickly led the enemy to crumble under the onslaught.
Eisregen II culminated in a complicated attack on an insurgent IED (Improvised Explosive Device) production facility. EGB (erweiterter Grundbefähigung) qualified troops from one of the German infantry companies were air assaulted into the objective by a single CH-47F Chinook. While the US helicopter provided air transport for the special operations capable troops, the air component of the Helicopter Assault Force (HAF) also included two German Tiger UHTs which loitered overhead during the assault. Specially trained, the EGB Parachute Infantry Companies can be considered as the German equivalent of the US Rangers and often operate in close cooperation with the German army Special Forces, the Kommando Spezialkräfte (KSK). After having attacked the facility, the EGB paratroopers were used to conduct sensitive site exploitation, gathering intelligence which would be used to chart the insurgent network.
Meanwhile, Germany’s airborne forces are being restructured due to the ongoing Transformation of the Bundeswehr. The German Division Spezielle Operationen (DSO – Special Operations Division) will give way to the new Division Schnelle KrÃ¤fte (DSK, Rapid Reaction Division) in mid-2014. While retaining the special forces from the
Kommando Spezialkräfte, the latter division will have only one airborne brigade whereas the DSO still fielded two airborne brigades with a total of four parachute infantry battalions. Two of these battalions will be restructured into larger parachute infantry regiments, which will focus on preparing for non-combatant evacuation operations (NEO), hereby preserving much of the army’s airborne fighting force while giving up some support units.

Established as a new unit in 2002, the current Division Luftbewegliche Operationen (DLO – Air Manoeuvre Division) will be abolished altogether. The CH-53G fleet has already been handed over to the air force while the remaining Heeresflieger (army air corps) regiments, two of which will be equipped with the NH90 TTH (Tactical Transport Helicopter) and just one with the Tiger UHT, will be integrated in the Rapid Reaction Division.
As part of a far reaching pooling and sharing arrangement between the German and Dutch military, the Dutch 11th Airmobile Brigade will also be integrated into the new division. Both sides will benefit from the cooperation with the Dutch bringing in considerable air assault expertise while the Germans can build on decades of airborne experience.