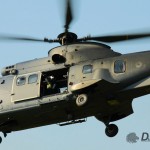 The Dutch MoD has given in to parliamentary demands and decided to retain a reduced fleet of eight Cougars until 2017, it has emerged. It has also decided that NAS De Kooy near naval base Den Helder will stay open following an MoD agreement with the civilian co-users and local authorities on how to share the financial burden of running the airfield.

In April Dutch defence minister Hans Hillen announced a series of defence budget cuts, which included a withdrawal of the Eurocopter AS532 Cougar fleet. While three of the AS532s were to be retained at Gilze-Rijen for SAR backup until the end of 2012 supplementing three Agusta-Bell AB412SPs in use by the Royal Netherlands Air Force for daytime SAR 14 Cougars from 300 Squadron were withdrawn in May so they could be transferred to the DMO for onward sale.

However, members of the Dutch parliament demanded that Hillen reconsider his plans for the Cougar withdrawal, arguing that maintaining a fleet of eight Cougars would better suit national and European helicopter needs. They argued, for instance, that because of planned cuts there will be a misbalance between the needs of the 11th Air Manoeuvre Brigade ground component and the number of helicopters available. National counterterrorist operations supported by Cougar would also be hit while there was a concurrent increased need for helicopters to support European battlegroup operations. Meanwhile, Dutch naval Westland Lynx SH14Ds relinquished their SAR duties in July. Until sufficient fully operational NH90s become available, Noordzee Helicopters Vlaanderen (NHV) has been contracted by the Dutch government to provide interim night time SAR coverage with a SA365N Dauphin II stationed at the Europoort heliport near Rotterdam.