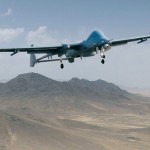 programme. Under the current multimillion-euro contract, the Bundeswehr will lease the UAV system for one year with an option for a two year-extension.

This SAATEG Interim Solution programme will significantly contribute to comprehensive situational awareness within the scope of networked command and control in Northern Afghanistan, a region for which Germany is responsible, by providing wide area real-time reconnaissance and surveillance data for German ISAF (International Security Assistance Force) troops. Flight operations will commence by mid March 2010. Compared to UAV systems currently in service with the Bundeswehr, the UAV system to be deployed is capable of covering a substantially larger footprint, while its high-performance sensors can provide reconnaissance data at even severe weather conditions.

Rheinmetall Defence and its partner Israel Aerospace Industries (IAI) will provide IAI’s Heron MALE (Medium Altitude Long Endurance) UAV system, including full intheatre logistical and maintenance services performed by Rheinmetall Defence. Missions of the UAV-System will be performed and controlled by Bundeswehr personnel. “Following the deployment of Rheinmetall’s KZO tactical UAV system by the German Army in Afghanistan earlier this year, SAATEG is set to make another important contribution to protecting our soldiers and their allies as they carry out their vital mission”, declares Heinz Dresia, Member of the Executive Board of Rheinmetall Defence, adding that “Rheinmetall’s responsibility for performing the complete package of service, repairs and maintenance for the SAATEG system positions us as a competent full-service supplier of logistic services in the field of aerial reconnaissance systems.” Itzhak Nissan, President and CEO of IAI, said: “We are proud to provide along with Rheinmetall our operationally proven UAV systems to the German Armed Forces. Our fruitful cooperation with Rheinmetall allows for the integration of the two companies’ capabilities to the benefit of both of our customers, and presents new marketing opportunities of UAVs and other airborne systems.”

The Heron UAV can carry a wide variety of sensors and information systems for gathering data for intelligence analysis to protect the friendly forces during operations in theatre. Depending on its mission configuration, the sensor package provided to the German Armed Forces includes a day/night electro-optical and SAR payload.

By utilizing satellite communications the system covers the whole area of operations of the German ISAF contingent. With a wingspan of 16.6 meters and a takeoff weight of 1,200 kg, the Heron can reach an altitude of 30,000 feet and can loiter for over 24 hours. The Canadian, Australian and French Armed Forces are already relying on the Heron as one of their main ISR sources in Afghanistan.

All logistical and maintenance services for the German Heron system will be performed by Rheinmetall Defence, which will operate a 24/7 maintenance and support centre in the theatre.

feb 18th, 2006
Usually the Marines of the Royal Netherlands Marine Corps (RNLMC) use the hot and sticky primary jungles of...