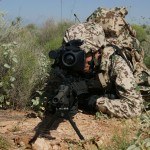 The German government has contracted with Rheinmetall Defence of Düsseldorf to
manufacture a preproduction version of the company’s “Future Soldier – Expanded
System”, or IdZ-ES. The order represents a major milestone on the path to equipping
the Bundeswehr with this state-of-the-art infantry system. A contract covering the
multi-million euro order has now been signed at the Federal Agency for Defence
Technology and Procurement (BWB) in Koblenz.

Rheinmetall’s Defence Electronic division has thus scored a significant new success
in the process of creating IdZ-ES, the world’s most advanced infantry system.
The “Expanded System” shares the same origins as the basic “Future Soldier”
system that preceded it, which the Bundeswehr procured in 2005 as a first step in
meeting an urgent operational requirement.
In the face of stiff national and international competition, Rheinmetall won the order to
design the “Expanded System” in mid 2006. The new version is intended to eliminate
certain deficiencies identified in the basic system, particularly with regard to
command and control capabilities and combat effectiveness.
But IdZ-ES is more than a mere add-on or extension of the basic system. Based on
an expanded user requirements profile and new findings resulting from extensive
trials, it really represents a new system in its own right. After supplying system demonstrators in 2008 as agreed, knowledge gained during
the now-completed risk reduction phase flowed into the specifications for the
preproduction system, the contract for which has just been awarded.
Based on this preproduction system, proof of producibility is to be presented at the
beginning of 2011, a key prerequisite for the start of full-scale serial production in
2012.

The award of the preproduction contract thus constitutes a significant step toward
equipping German infantrymen with a groundbreaking system that will substantially
enhance the combat effectiveness of the country’s armed forces.
An outstanding feature of the IdZ-ES is its comprehensive approach, which takes full
account of the complex operational requirements army planners now impose on
modern soldier systems. IdZ-ES is designed to bring a 10-man infantry section and
its vehicle into the command loop of network-enabled operations. This network,
consisting of reconnaissance assets, command and control components and fires,
enables swift exchange of information, facilitating the creation of a common relevant
operational picture, which forms the foundation for planning and executing military
operations.
On his helmet display, the soldier receives all the data he needs regarding the tactical
situation, the location of friendly forces, his mission and the status of the system,
which also includes GPS, an inertial navigation system and a magnetic compass. In
terms of design, the system is more ergonomic than ever, featuring reduced weight,
greater miniaturization and improved integration of individual components.
IdZ-ES’s modular battle dress, body armour, and carrying system makes sure that
soldiers can execute their missions even in extremely difficult operating conditions,
providing protection from visual and infrared detection, the effects of the weather, and
bacteriological and chemical agents. Flame-retardant materials and protection
against insect bites further enhance the overall level of user comfort and safety.
Integrated into the system is a compact electronic backpack element, containing the
radio, soldier backbone computer, portable C4I computer for the section/squad leader
and the GPS module.