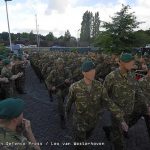 You are reading
Blood, Sweat and… Cheers 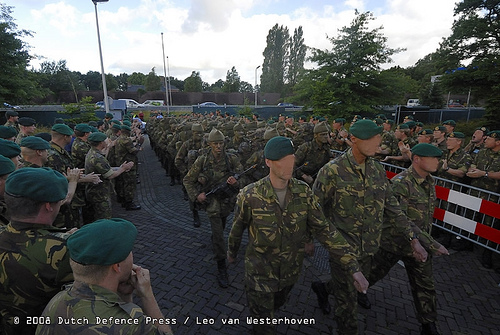 Early morning in a light drizzle, June 27th 2008, a large crowd gathers outside the gates of “Engelbrecht van Nassau” barracks, Roosendaal, the Netherlands. Inside the gate, soldiers, friends, girlfriends and family line the route to the parade-square.

All the instructors are fully-fledged commando’s, while only they have as no other a good knowledge of what kind of person they want in the Special Forces teams.

The crowd cheers the ‘survivors’ out of the group of 54 men who started the Basic Commando Training course of the Netherlands army’s Commando Regiment (Korps Commandotroepen, KCT). This course is considered the toughest in the Dutch military, and by far it really is. They are the ones who made it through the eight gruelling weeks that lay behind them. Among the twenty-five, some who started the course straight from civilian life. They are referred by the Regiment as ‘spijkerbroeken’ (Dutch for jeans). A unique program not known to any other nations Special Forces Regiment. The Dutch Commando Regiment ideals is also to recruit only those with military backgrounds, preferably infantry. Reality demands they also recruit straight from civilian life. The necessity therefore is basically the Dutch army is just too small to provide enough potential recruits. But in no means they allow lower standards for both groups.

From day one the civilians and soldiers are in the care of the Regiment’s own Instruction Company. The recruits start with eight weeks of Basic Training (BT). Although BT is basically the same throughout the Dutch army, this one is a little tougher. There is more emphasis on both physical and mental fitness to prepare the recruits better for the things to come later on.

For the regular soldiers BT is a sort of refresher course and to get used again to the relentless pace of training and fieldwork. Second they function immediately as some kind of an oracle for the civilian recruits who are totally new to military life. It is also important the recruits get to know each other and to build team-spirit before they all start the Basic Commando Training (BCT) course ( in Dutch the ‘Elementaire Commando Opleiding’, (ECO).

The Regiment is proud of its World War 2 commando-heritage and BCT is full of it, starting with living in Spartan conditions for eight weeks. The real selection-training starts with a transfer from the cosy barracks to a special permanent camp called ‘Bakhuys Roozeboom Commando Kamp’. A camp no more than a handful of large unheated tents acting as quarters. The only brick building is the classroom and instructors mess.

The recruits will wear a cap-comforter first worn by their WW2 predecessors and the men carry a toggle (short piece of climbing rope with a loop at one end and a peg at the other) at all times. They are never without their weapon and ops-vest containing munitions, food, water and survival-kit. All movement is on the double and the discipline is strict.

The instructors change from being amicable, helpful during BT to unpredictable, and strict during BCT. All recruits are stripped of rank and are called ‘cursist’ (Dutch for trainee) for the duration. During the eight-week BCT there is no distinction between the civilian and military trainees. All are on the same level of proficiency when it comes to basic soldiering skills. Even though the recruits carry no rank, the NCO’s and officers among the recruits still have to show their leadership capabilities.

To round of the BCT, the trainees perform a week final exercise called the ‘Afmatting’ (Exhaustion). This time this exercise named ‘War-Spite’ is conducted in the ‘Zeeland’ province of the Netherlands. From here, the trainees had to walk al the way back to a point near their final destination, about 240 kilometres.

The Commanders March, 25 kilometres with heavy packs brings them to ‘Bakhuys Roozeboom Commando Kamp’ before they walk the last kilometres to the fictional ‘gate of tears’ of the “Engelbrecht van Nassau” barracks.

In the afternoon, they receive the coveted Green Beret in front of the whole Regiment and their parents, family and friends. The official ceremony has remained unchanged for a long time.

It even brings out the Regimental flag with colours.

The recruit who performed best according to the other trainees and the instructors is awarded the Sturgess-cup.

First awarded in WW-2 by the British general Sturgess it is still another of the traditions kept by the Regiment.

Under the paternal eye of the Regiments commander, Colonel Cees Vollaard, the new commando’s received there green beret out of the hands of the Inspector General of the Dutch Armed Forces, Vice-Admiral Ir. Michiel van Maanen.

Also the British Defence Attaché Colonel Heal, who is a Royal Marine Commando himself, was a special guest at the ceremony.

But before they can wear the Green Beret, the ceremony calls for the throwing on the ground of the cap-comforter.

The first time – after shouting out loud the Regiments motto “Nunc aut Nunquam”, now or never – the recruits wear the green commando beret is an emotional event.

Only now can the family and friends join the men to celebrate.

This is not the end, the green beret signals the beginning of another gruelling training period lasting a year and where they will learn how to free-fall, and specialize in being a medic, sniper, demolitions expert or communications expert. Once again, with except of the Medic training, all in the care of the Regiment’s own Instruction Company. Only after that year they will join as a ‘Special Forces Operator’ one of the four special operations companies of the Dutch army Commando regiment.