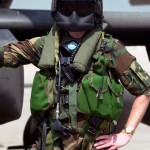 You are reading
Air Warrior 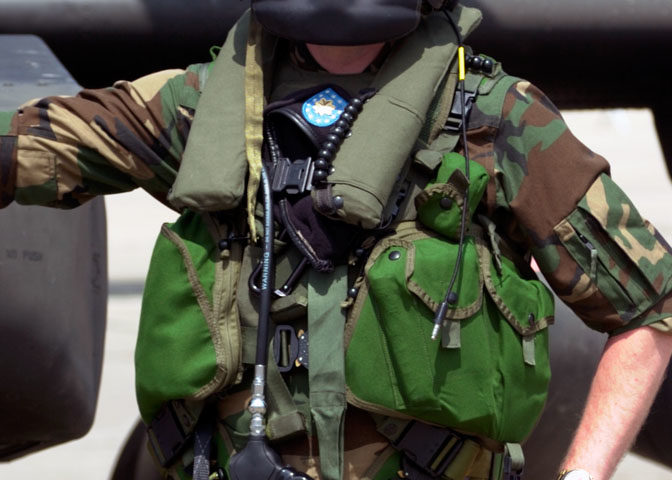 With all the emphasis on technology, it is easy to forget the persons working with it. It is not just the tanks, planes and ships that that benefit from the enormous leaps made in the past decades. The combat soldiers has for many, many years almost been forgotten, or at least not fully profited from the technologies available. Only the last five years have countries taken to heart the welfare, safety and situational awareness of the soldiers in the field. Not that they were neglected, the technology at their disposal never evolved with the same speed as their major combat systems. Studies like Land Warrior (USA), FIST (UK), Felin (France) and SMP (Netherlands) first set out to close the gap by testing massive amounts of technology. The combat soldier looked more like a walking computer, taking away his direct perception of the battlefield around him. Slowly but surely a more sensible approach was followed. High-tech is still way up on the agenda, but other items now find their way to the combat soldiers. Remember, technology is not just computers. It is as much clothing, sleeping bags and rations. And combat soldiers are not just those on the ground. Pilots and aircrew are just as much combat soldiers as their ground-based brethren, and not only their flying machines are high-tech. Enter the Air Warrior.

As the name implies, Air Warrior is closely related to Land Warrior, the U.S. Army’s premier programme for soldiers on the ground. Air Warrior is also a U.S. Army project, but aimed at aircrew. This first major project is to ‘hit the streets’ in 2004, when aviation units deploying in support of Operations Iraqi and Enduring Freedom will be issued Air Warrior.  The Air Warrior system developmental testing began in July of 2001 and was completed in May 2002, followed by operational testing which completed in August 2002. The full rate production decision occurred in November 2002.

As in most cases, Air Warrior is not just one item. It consists of a multitude of items that, when put together, ensures the wearer is better able to survive on the battlefield. Basically, aircrew personal equipment has not changed drastically from the Vietnam War in the Sixties. The CWU-27/P flightsuit and SPH-4 helicopter helmet are from that era, as is the SRU-21/P survival vest. But in the 21st century all that is going to change.

First off is the uniform. The one-piece flightsuit (that replaced a two-piece Nomex suit in the 70’s) is replaced with a two-piece uniform in camouflage colours for the first time. The Aircrew Battle Dress Uniform (ABDU) is made of Nomex, Kevlar and stainless steel (2%) and tailored like the normal BDU of the U.S. Army, albeit with some extra pockets. This two-piece is the first in a long line of improvements. For the first time aircrew wear issued camouflage fatigues for the same reasons ground soldiers wear camouflage.

The new HGU-56/P Aircrew Integrated Helmet System (AIHS) is not only lighter, but also offers better impact protection and is modular. That means each crewmember can mount whatever devices are necessary according to helicopter type and mission at hand. One of the more striking features is the maxillofacial ballistic face shield. It makes the wearer look and sound like Darth Vader out of Star Wars. But it does what the name implies, protect the lower face. It is especially functional for crewmembers who routinely stick their head out of the helicopter, like the crew chiefs/gunners. Not only to protect them from gunfire but also from debris when the aircraft is close to the ground on landings and take-offs.

Aircrew have always worn their survival equipment on their bodies. When forced to leave the helicopter in a hurry it is nice not having to worry about forgetting it. Combat experience has shown that when an aircraft is downed by hostile fire and the crew is able to egress the wreckage, they depart the aircraft rapidly and only with what they are wearing. The new Primary Survival Gear Carrier (PSGC) replaces the SRU-21/P survival vest. The PSGC is a harness, fitted with various pockets. The twelve pockets can hold everything from survival, signalling and communications equipment and then some. Because it is a harness and not a vest it has leg and chest straps for a good and secure fit, and incorporates an integrated extraction capability.  If terrain or other circumstances do not permit a landing at the crash site, the rescue helicopter can lower a hoist line and the downed aviator can hook up to the line and be pulled to safety. What is does not have is a place to store weapons. The M9 Baretta is carried in a thigh-holster, not unlike Special Forces.  The survival knife has its own scabbard for carrying it just above the ankle on the right leg.

For over-water operations a new slim Low Profile Flotation Collar (LPFC) can be fitted to the PSGC. On the back there is room for a large but slim pack, the Over Water Gear Carrier containing a one-person rubber dingy and an underwater breathing device, called the Survival Egress Air (SEA) Mark 2.

One of the main concerns is the effect of heat on aircrew fatigue. One way to counter that is the Microclimate Cooling System (MCS), a vest that is worn under the ABDU. It pumps 65ºF water from a small aircraft-mounted refrigerant unit around the torso and will keep the wearer fit for more then three times the duration without the MCS. This system is being adapted for use by several ground vehicles and their crewmembers as well. Air Warrior is just beginning to reach the troops in the field. And the developments do not stop there. More is in store to enhance the lethality and survivability of U.S. Army aircrew. Mission planning and battlefield situational awareness for the pilot will be enhanced by a lightweight and portable digital kneeboard.  This kneeboard brings digital messaging, GPS-based moving map navigation, and friendly force/unknown location capabilities.  Cockpit air-bags are currently being installed worldwide, a wireless aircrew intercom system is in development, and improvements to existing helmet displays and chemical and biological protection are in the future for the U.S. Army’s Air Warrior..