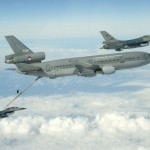 You are reading
Royal Netherlands Airforce hit by drastic cuts Friday April 8, 2011 went off to a bad start as J-640, a Dutch F-16 planned for imminent transfer to Chile, made a hard landing with heavy damage as a result at Charleroi airport, Belgium. Later that day, the men and women of the Dutch armed forces were informed on huge cuts to the Dutch armed forces. After several postponements which amounted to a delay of nearly a month, the Dutch defence minister, Hans Hillen, finally unfolded his plans to drastically reduce the RNLAF amongst others. The intended force reductions over the next four years will amount to a total of 12000 defence jobs. As of May 9, 2011, DHCs (Defensie Helikopter Commando) 300 Squadron will cease to operate 14 AS532 Cougars. The remaining three will soldier on until the end of 2012 to supplement the search and rescue AB412SPs which have severe limitations in adverse weather and at night. Once sufficient full operational capable NH90 NFHs are in service to take over from the ageing Lynx SH14D, the last Cougars will leave service. The retirement of these light transport helicopters will cause severe short-term limitations on the conduct of helicopter operations by the Dutch 11th Air Manoeuvre Brigade and Royal Netherlands Marine Corps forces, at least until the new CH-47Fs are introduced starting late 2011 and the NH90 TNFHs are fielded from 2013 onwards. The phasing out of the AS532 does negate the need for a midlife update programme for which funds were initially planned by the previous government. Planned upgrade of the AH-64D fleet to Block II configuration will remain largely unaffected. Fixed wing squadrons are affected by the loss of another 19 F-16s. The remaining 68 F-16s (of which 10 are to remain with the Netherlands detachment at Tucson, Arizona) will be consolidated in four fighter squadrons. One of these will continue executing tactical training, evaluation and standardisation (TACTESS) duties. A welcome surprise was the news that Leeuwarden AB would in fact remain as a main operating base with two F-16 squadrons. Volkel on the other hand will lose its 311 Squadron. Its assets had already been integrated with those of 313 Squadron and the squadron will now cease operations on May 9 as well. Eindhoven AB will see the loss of the cargo configured DC-10 which never saw operational use. In its unique configuration with recently installed glass cockpit, it will prove a challenge to sell. The RNLAF initiated a unique cockpit upgrade program after previous efforts to join similar planned initiatives by the USAF and Federal Express, did not prove to be succesful. The Dutch government intends to transfer authority over Eindhoven to civilian commercial ownership in the near future. The remaining transport fleet might stay as a major user but studies are also underway to investigate possible co-location of Belgian and Dutch air transport forces. Whether this means a transfer to Belgium, remains to be seen. If given the green light, this would have serious international consequences as the European Air Transport Command (EATC) headquarters was only declared operational at Eindhoven as recent as September 1, 2010. RNLAF ground based air defence and force protection units are hit as well. A quarter of the Patriot batteries will be withdrawn from service and closer co-operation with Germany is being sought in this field. All relevant intermediate level and depot level maintenance for fixed wing and helicopter assets will be centralized in LC (Logistiek Centrum) Woensdrecht which is to transfer back into the hierarchy of the air force after its previous stay as part of the joint Defensie Materieel Organisatie (DMO). The next date which is eagerly awaited by all personnel, is July 1. More detailed information will then be announced on how the defence department intends to implement cuts to its personnel strength which could amount to a forced reduction of up to 6000 servicemen. There will also be a review of infrastructure needs in which a possible move of the transport fleet is included. This could also have consequences for naval air station De Kooy, home to the NH90, if all parties involved fail to reach an understanding on its continued military use. The current government wants to outsource most non-essential, non-strategic tasks. This could have implications for the PC-7 fleet in the near future; especially with pilot numbers dwindling increasingly. Investments will be made by revitalizing the long sought after buy of a system of MALE UAVs consisting of four aircraft. This will at last compensate some of the capabilities which were lost when the P-3C Orion inventory was phased out. The defence minister has also indicated that the current government will stay committed to buying a second F-35 test article in order for it to participate in the initial operational test and evaluation (IOT&E) of the Joint Strike Fighter programme. Funding for the F-16 replacement project will be cut from â‚¬6.2 billion to â‚¬4.5 billion. A formal decision on which aircraft will replace the F-16, has once more been postponed; this time by three more years. This means that, if selected, the F-35 will not be inducted into the RNLAF before 2019.