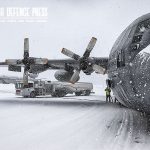 You are reading
Arctic Operations

During our trip to the Dutch marines ‘Arctic movement and survival course’ in northern Norway last February, we witnessed first-hand how the Royal Dutch Airforce operates in these cold and dangerous conditions.
We were supposed to fly out of Bardufoss on the C-130 Hercules from 336 Squadron after moving there by bus from Evenes. The KDC-10 from 334 Squadron that would fly out of Evenes that day was scheduled to fly to Budapest. The bustrip was uneventful and the weather was nice and clear. We raised an eyebrow when we heard that the KDC-10 was being diverted to Bardufoss due to poor weather conditions and snow at Evenes. But even before the plane landed that same weather caught up to us. Visibility was reasonable but it was snowing when it did land.

When the military personnel disembarked it had stopped snowing and visibility was again very nice. Not so much an hour later when our C-130 arrived in a snowstorm. We only saw it when it was just over the threshold. Soon after landing our luggage was loaded into the belly of the Hercules.

The snow came and went over the next few hours, covering both planes with snow and putting our flight out of Norway at risk. It was determined that the C-130 could not take-off any-more within save limits and make it back to Eindhoven in time. That would leave us and around thirty military personnel stranded for the night. Our only chance was the KDC-10. That was still within limits and could make it back to Eindhoven in time. But that meant we had to leave our luggage in the Hercules. Getting on board and de-icing would take all the time there was and there was no time to lose. In the end we made it back in time, but only after a very cautious taxi to the runway and a exciting take-off.

Thanks to the great crews of the Koninklijke Luchtmacht and the cabin crew of the KDC-10 especially for making us feel welcome and ruining their planned trip to Budapest.