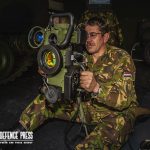 You are reading
Netherlands fire their first GILL

On Wednesday 12 May 2004 the official handover of the first Israeli Rafael Armament Development Authority medium-range anti-tank (MRAT) system “GILL” to the Royal Netherlands Army (RNLA) took place at the military training area Bergen-Hohne in Germany. Shortly after followed by the first life firing. Gunners of 12 Staff and Anti-Tank Coy belonging to 12 Infantry battalion (Airmobile) Regiment Van Heutz had the honour to be the first unit to receive and fire the Gill anti-tank guided weapon (ATGW).

The GILL will replace all TOW and most of its Dragon ATGW within the 11 Airmobile (Air Assault) Brigade. In due time the GILL will replace all current TOW and Dragon ATGW in service with the RNLA and Royal Netherlands Marine Corps (RNLMC). 12 Infantry Battalion (Airmobile) is the first while its part of the Air Manoeuvre Task-Force initial entry capability, assigned to NATO Response Force (NRF) 4 beginning in January 2005 for a timeframe of six months. The next units to receive the GILL are in the following order; 11 and 13 Infantry battalion (Airmobile) as they are the next units assigned for a possible deployment to Iraq as the main force of Stabilisation Force Iraq (SFIR). This even though the Dutch government had still not made a decision on the extension of the military contribution to the stabilisation force in Iraq. In the meanwhile both RNLMC infantry battalions will receive the GILL. When that’s done Anti-Tank units of both Mechanized brigades of the RNLA are scheduled to receive the GILL.

The Gill ATGW is a lightweight, ‘fire and forget’ weapon system that can easily penetrate an homogeneous armour shield of 800mm at a range of 2500 metres. While its a top attack type and attack the vulnerable upper surfaces of the target vehicle, its even capable to penetrate any shield in an diving angle of 30º. Some Dutch gunners of 12 Infantry battalion even suspects, during this life firing exercise, that a range of 3000 metres is also realistic feasible, but this wasn’t tested. Although the range of the GILL is considerable shorter than the 3750 metres of the TOW, Dutch gunners already prefer the GILL. Its ‘fire and forget’ capability enables the gunners a ‘shoot and scoot’ capability. During the flight of a wire guided TOW missile the gunners were always forced to stay focussed on the target. Which makes them vulnerable to counter-fire for the duration of the missiles flight-time. Another additional advantage is the capability to fire the GILL from a tripod which is not attached to the LSV (airmobile light vehicle).  The small weight of only 26 Kg makes this possible. The LSV with which the GILL is transported remains in cover while the gunner does its work.

Rafael is the prime contractor, with STN Atlas, Diehl and Thales Netherlands as the major subcontractors.