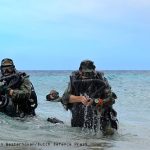 You are reading
Dutch SF-operators train in the Caribbean 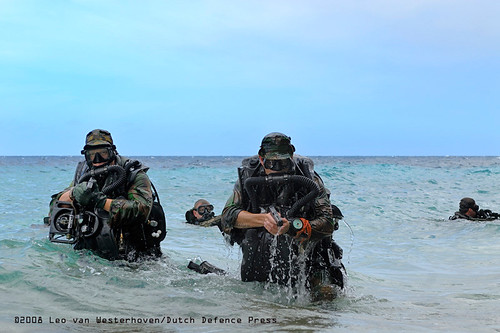 A warm weather, ‘riverine’ special-operations training by Dutch army Special Forces Operators brought me this time to the island of Curacao, which is part of the Dutch West-Indies in the Caribbean. The first two weeks were used to acclimatize and train the operators of 108 Commando company of the Royal Netherlands army Special forces Regiment (Korps Commandotroepen), in warm weather riverine special-operations. The final week the unit put it all into practice in a real life scenario.

Special-operations on or projected from inland waters have come to be called riverine warfare. Such a fighting force, tailored as necessary to the environment, bring combined operations the unique advantages of power, greater mobility, ease of concentration, swift shift of objectives, speed, flexibility, versatility, and surprise. The goal of this exercise is two folded. First to build awareness – for the units specialized combat-divers team -from the green water (coastal lines) to the brown water (rivers and canals) in an integrated battle space.

The land environment, the core focus of these SF operators, is a more complex matrix now. So you have to put riverine as an option into this bigger picture. A river provides many if not most of the same advantages as a sea coastline in terms of mobility, autonomy, etc.

Second it’s intended as a follow-up course for the regular SR/DA operators in the unit which already have done the basic and mobility course on riverine operations. This additional course will train the operators in a warm weather riverine conditions.

Riverine is one category among others on the Dutch SF operators functions-and-capabilities checklist. Even as its own operational subset, the riverine role is an expanding one; the goal ultimately is to bring area control, interdiction, insert/extract, fire support coordination, and identify/locate/destroy missions firmly and officially into the riverine sphere. Today’s threats and missions is the Dutch Special Forces Regiments cue to rethink itself. First to reorganize accordingly. Second to recognize; that is, recognize where the gaps are … where they need to expand into new capabilities to be an ever-more viable fighting force. Third and last to redistribute the current Regiments force structure to add fluidity to the Dutch Army’s ability to fight in this new kind of missions.

Today’s foe has everyday items at his disposal such as cell-phones, laptops, and the Internet, that afford great advantages that riverine warfare’s adversaries of yesteryear did not have.

But on the other hand, the Special Forces Regiment riverine warriors of today likewise have an array of new technologies at their disposal.

Even though most operators were new, for the most part, to riverine operations in these exotic conditions, they managed to get up to speed pronto. Unit cohesion started taking shape immediately among the operators. It’s all about the prep work, a sergeant says; “Train the way you fight, with the same equipment, the same mentality, and the same type of intensity you’re going to have there in combat….” In order to have a successful mission you have to have a successful training pipeline. And, quoting the same sergeant, who gave voice to some timeless Dutch SF Regiments wisdom: “It is better to feel pain in training than to bleed in combat.”