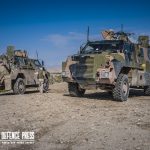 You are reading
Bushmaster, Australian “Battle-Limousine” has Dutch soldiers covered in Afghanistan

The countries with troops in Afghanistan as part of the NATO-led International Security Assistance Force (ISAF) are tailoring army acquisitions to the Afghan Mission. Facing a resurgence of militant violence as NATO takes on greater responsibility in Southern Afghanistan, they now recognize that their soldiers need better protection from roadside bombs and land mines, the weapons most commonly used during the kind of attacks carried out by Taliban guerrilla-fighters.

In recent months, the governments of Britain, Canada, Germany and the Netherlands have all faced domestic criticism. Equipment sent with many of the newly arriving troops, as part of the ISAF expansion into the south, has been chosen for speed and mobility, rather than armour protection. All four nations have recently ordered light armoured dedicated mine-resistant patrol vehicles to replace their less-protected vehicles in Afghanistan.

Good examples are the recent Britain’s acquisition of 86 Force Protection Industries, Inc. ‘Cougar’ Protected Patrol Vehicle variants (aka ‘Mastiff’) and 401 obsolescent Italian Iveco ‘Panther’ vehicles; Canada’s emergency procurement of 25 extra BAE Systems Land Systems / OMG’s RG-31 ‘Nyala’ vehicles; Germany’s additional purchase of 149 Krauss-Maffei Wegmann ‘Dingo 2’ vehicles and the urgent need for an additional patrol vehicle for the Dutch troops in the Southern Afghan province of Uruzgan that have prompted the Dutch to rush through the purchase of 25 Australian-made ‘Bushmaster’ IMV (Infantry Mobility Vehicle) armoured vehicles from Thales subsidiary ADI Limited in the Victorian city of Bendigo in Australia, at a cost of € 24,9 million (US $31.7 million at current conversion). Additional to this project Canada is loaning Dutch forces in Uruzgan in the meantime 10 of its RG-31 ‘Nyala’ armoured patrol vehicles as an interim solution.

The Dutch urgent requirement, to bridge the capability gap that exists between their 1970s vintage Patria XA-188, YPR-765 armoured personnel carriers and Mercedes G-class in use, was completed in about one month time. On June 23, 2006, the Dutch ‘Defensie Materieel Organisatie’ (defence procurement agency, DMO) started an acquisition project that has resulted in the selection of ADI’s Bushmaster. On 28 July, 2006 the contract was signed. Protection, operational flexibility and fast delivery times were of overriding importance in the selection process out of eight candidates. This agreement was concluded in close cooperation with the Australian government. The Australian Defence Force is supplying the 25 vehicles to the Royal Netherlands Army (RNLA) from its own new stock. In late August a total of 23 Bushmaster vehicles have been transported to Afghanistan. The other 2 were handed over in Holland on 1 September and will be used for training and reserve purposes.

Even tough the US military has begun fielding a new variant of the so-called ‘Humvee’ jeep (the M1151 and M1152), the retreat from Jeep-like vehicles is accelerating among Western militaries. Despite some armour improvements, due to their inherent design limitations — they are built with a conventional flat bottom and frame — vehicles like Mercedes-Benz G-Wagons, Land Rovers, and even the new Humvees are insufficiently protected against land mine, IEDs (Improvised Explosive Devices), firebombs, grenades, small arms or mortar fire and RPG (Rocket Propelled Grenade) threats in modern conflict zones. The thing is, flat bottoms are mine-blast traps. The South Africans faced this issue a long time ago. They built since vehicles like the Casspir, Mamba and Springbok with an V-shaped hull that deflect a mine blast to the sides. The mine may blow off the tires, but the occupants have a much better chance of surviving.

Conceived to protect and rapidly deploy battle-ready troops in all field conditions the Australian similar-sized Bushmaster IMV use this principle. The vehicle offer high degrees of ballistic and mine protection, coupled with excellent all-terrain agility, comfort, from sub-zero mountain areas to desert and tropical conditions and easy maintainability. This makes the vehicle suitable for deployment in complex, diffuse and lethal operational environments such as Afghanistan. The vehicle has an all-welded V-shaped hull of armour monocoque design to which the suspension is attached, and within which the main automotive and other components and protection to both occupants and main components are housed to facilitate rapid field repair.

The Bushmaster, in its original configuration, can transport up to ten troops (including the driver) and their full marching kits along with sufficient ammunition, fuel, food and water to be able to operate, without  re-supply, for up to three days. However accordingly to accommodate operational requirements the crew seating can be reconfigured. The Dutch vehicle will initially accommodate five soldiers, allowing them to carry additional equipment. The crew-cabin, with 1,415mm headroom, is normally fitted with seven face-to-face ergonomically designed crash-type seats with full harness seat belts. These seats provides additional protection against spinal injuries. The cabin is further fitted with windows for all-round vision, a relatively large rear door for easy mounting and dismounting and four outward-folding roof hatches with locking handles to provide protection against ambush and alternative escape routes.

The driver cabin is fitted with a large windscreen and side windows for all round visibility. The dashboard is arranged with easily readable and night vision goggle compatible cockpit instrumentation. The driver can use the push button control central tyre inflation system to adjust tyre pressures on the move and in all terrains including highway, sand, mud/snow and emergency conditions, and to keep the tyres inflated with limited punctures.

Furthermore the Bushmaster will be equipped with the Thales SOTAS M2 multi-media communication system, to be supplied by Thales Land & Joint Systems, Huizen, The Netherlands. It is a full-fledged multimedia communication system for use in practically any military vehicle, between vehicles and between vehicles and command posts. It enables speech, video and data transfer and can be used to set up a local area network. SOTAS M2 noise filters ensure unambiguous communication.

Bushmaster’s power-pack a ZF automatic transmission teamed up with a six cylinder, turbocharged Caterpillar 3126E diesel engine develops up  to 246kW (330hp) at a low 2400 rpm. It provides a power to weight ratio of 16kW per ton which enables it to maintain a road cruise speed of 110km/h and a maximum speed of 120km/h. The vehicle has an extended range of more than 1,000km.
A double wishbone all-wheel drive independent suspension system designed by Arvin Meritor/Timoney in County Meath, Ireland provides good cross-country mobility across difficult terrains. The suspension is rated at 7700 kilograms per axle, ensuring that the vehicle has a higher payload option and ensuring that the vehicle is not working at maximum capability the whole time. Much more effective braking is also hereby assured. The complete power-pack, (engine, automatic transmission, cooling system) can be easily replaced in the field without special tools. Precise control comes via a power assisted  steering system.

The hull and glass offer protection against the blast of Claymore, anti-tank mines, anti-personnel mines, mortar shrapnel, IEDs and NATO 5.56mm and 7.62mm ball ammunition, whilst protection against armour-piercing rounds and self forming fragment mines is also available as an option. The shaped hull deflects the blast from the equivalent of a 9.5kg high-explosive land mine detonated under any wheel or under the centre section of the vehicle.
Wire cutters are installed on the roof on both sides of the vehicle to protect soldiers exposed above the roofline.

Externally mounted fuel and hydraulic tanks and the 270 litres cooled drinking water tank will blast free of the vehicle, contributing to crew safety in the event of explosions to reduce fire hazards and the ample storage bins are also as standard external mounts.

Of the 25 ordered vehicles, 12 will be delivered with the Thales ‘SWARM’ (Stabilised Weapon And Reconnaissance Mount) overhead weapons system. SWARM use advanced optics and thermal imaging, and can be controlled from inside the vehicle. The overhead weapons system will replace the standard pintle-mounted 7.62mm or 12.7mm Machine Gun up top.

“Not only is this the first export sale of the Bushmaster which is good news for future export prospects, these combat proven vehicles will also be serving alongside Australian forces who stands next to the Dutch forces in Afghanistan,” said Norman Gray, managing director of ADI and country director of Thales.
The in country project support will be provided by Thales Netherlands. The through-life support will be provided by our US partner Oshkosh Truck Corporation in both the Netherlands and Afghanistan.”

US Army defence officials have expressed interest in the Bushmaster after observing its capabilities with the Australian Army.

Transportable in C-130 Hercules aircraft for rapid deployment in forward areas of operation the Bushmaster is often described as a “battle limousine”. With split full cabin air-conditioning, ergonomic seating, large windows and even chilled water on tap this vehicle ensures that Dutch an Australian soldiers arrives protected in the very best condition possible, even in the most inhospitable environments.