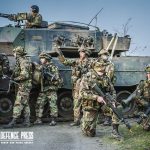 You are reading
Dutch MCTC, as close as real combat ever gets

On 24th of April 2003 the formal handover of the Mobile Combat Training Centre (MCTC), developed by Saab Training Systems, to the Royal Netherlands Army (RNLA), will take place at the Manoeuvre Training Centre in Amersfoort. Spurred on by the example of the US Army’s Combat Manoeuvre Training Centre (CMTC) at Hohenfels in Germany, the RNLA established its own Combat Training Centre (CTC) to hone the battle skills of its combat units. It integrates training and communications technologies in a mobile package. The whole system is containerized in thirteen 20 foot ISO containers, allowing the RNLA to quickly deploy for any training mission. DDP talked to Mr. J.A. Vermeulen, RNLA’s project-manager for the MCTC, and offers you a look at the tools and the fidelity of this system.

“Let’s begin to look at the RNLA’s training cycle, “starts Mr Vermeulen. “This cycle is divided in three phases of one year each. First phase is a build-up phase prior to the second phase, a combat-ready period, followed by a recuperating phase. In the past we have deployed often during the final stage of phase one, a battalion or brigade sized (up to level 5) unit to the CMTC at Hohenfels or, as the RNLA is planning to do in the future, to the German GÜZ CTC near Magdeburg. Due to national requirements and finance available the RNLA is moving towards the MCTC concept to allow company sized (up to level 4) exercises to take place at any training site available. It’s aimed to provide them realistic, tough, hands-on training through the use of high-tech equipment, realistic Opposing Forces, professional Observer/Controller (O/C) teams, and intense, realistic scenarios.

The road was long, like many major procurements, it has taken the RNLA seven years to get from the initial MCTC concept to contract award. The decision to award the MCTC contract, in June 2000 to SAAB, follows a procurement process in full international competition. The MCTC underwent an intense certification program. One of the final significant system tests took place during the first three weeks of December 2002, at the training site “Vogelsang” in Germany. These tests were a company-level exercise including functional verification tests integrated with military procedures in a fully operational environment. We have choose especially this training site for its mountain terrain with very steep slopes and valley’s. If the system function here it function everywhere and it did, with great success.”

The MCTC features a number of innovations including full instrumentation and the use of discrete O/C teams who receive on their rugidized laptops constant near-real-time information on all players and events deployed throughout the CTC. It takes technicians from SAAB two days to build any austere training site into a full-blown instrumented CTC. First they install the hardware: the warehouse facility where all the training equipment is stored for distribution; two After Action Review (AAR) facilities, situated in two extendable containers; two similar containers that houses Tactical Analyses & Feedback (TAF) and exercise control (EXCON) with various display facilities all operating with standard Microsoft® Windows COTS tools. Here they provide the tools and functionality for planning and preparation, initialisation, exercise execution, analysis and evaluation of exercises. TAF/EXCON also conduct Area Weapon Effects Simulation that implements the functionality necessary to simulate and control indirect fire events including artillery, mortar, anti-tank and anti personnel mines, guns and chemical weapons. Realism is enhanced by unique player ID codes to ensure accurate data collection for the highest quality AAR. Computer printouts and graphical displays provide all participants with objective and irrefutable data on their performance. All hits, fire position and status data is digitally recorded at EXCON along with simultaneous recordings of all voice traffic on the 19 combat radio nets. To make all these things work, a wide-area instrumentation and communications network which consists of five ground based relay-stations is installed. Linked together they provide coverage, depending on the terrain up-to 200 square kilometres, over the exercise area. The communications concept was changed completely shortly after signing the contract, causing a minor setback. Initially it would use the TETRA network, but now the system operates in the military radio-relay band 1, in the 345-355 MHz range and data is digitally transferred through a, by SAAB supplied, “G-Max” digital data-radio from Wood & Douglas.

The MCTC will have a capacity to equip three company or combined arms team sized units with high fidelity Direct Fire Weapons Effect Simulators and Tactical Engagement Simulation (TES) systems that provide the realism and fidelity for all types of training. Using a detailed Order of Battle information, and the soldiers ID smart-card, while units will deploy to the MCTC with all their weapons, vehicles and combat equipment, the training staff know exactly which TES add-on belongs to whom and where it is located. Handing out these systems, mount and familiarize with it will take less than six hours. Then the command staff has to prepare a plan to tackle the scenario set by the directing staff and issue orders to their troops. Once committed to action the participating unit finds itself up against a live enemy that has compatible TES equipment. All players in the box are equipped with a Personnel Detection Device (PDD). On all personal- and group weapons, the BT-47 Small Arms Transmitter (SAT) is installed and an additional unit that send GPS location data and event data to EXCON. A Small Arms Alignment Device downloads weapon specific parameters and aligns the SAT. For each weapon type, the SAT is adapted to work together with firing blank rounds. This is for two reasons. The realistic firing rate and maximum number of rounds that can be fired are controlled by the use of the blanks. And he can’t cheat, ensuring that silent killing is not possible. The heart of the system is the PDD and is worn like a vest. It controls the performance of the SAT in two ways. It generates a vulnerability model for the soldier for direct fire and indirect fire such as artillery and mine fields. It controls his instrumented gasmask in case of a chemical strike. The PDD also enables the SAT to simulate firing by automatically transferring the soldier’s ID and status to the SAT via a short-range RF link. The PDD has three separate detector loops that are used in combination with the engaged ammunition code to determine the affect of a hit on the soldier. Near misses and hits are statistically analyzed to give the correct severity of wounds. Each type of wound gives a specific time for medical treatment. This provides in the near future the opportunity for realistic training of Combat Life Savers and higher qualified levels of combat-medics on the battlefield.

The BT-46 laser simulator is installed on all types of direct firing weapons, from GILL and AT-4 anti-tank weapons, to the Leopard II A6 MBT. It is a two-way simulation and requires the target to be equipped with reflectors. The laser pulses emitted from the firing system are reflected back from the target. This indicates the precise range to the target to be determined and used in the complex ballistic calculation that assesses whether a hit had been achieved. Built-in gyroscopes enhance the system’s performance and make it possible to exercise the full range of gunnery techniques for all type of targets. To be successful, weapon procedures, choice of ammunition and handling must be followed strictly by crews and gunners. BT-46 has the ability to simulate accurately the trajectory (or flight characteristics in case of a missile) in real time, with great precision. Immediate feedback from each firing is provided through a realistic sound cues over the intercom system and a flashing light on the target. The target computer combines information about its vulnerability with data received from the firing system to determine whether it has been hit and, if so, what damage has been caused. BT-46 simulator applications are developed from a set of generic components, making it a fairly straightforward task to develop new ones. The potential to simulate future weapons within the RNLA is almost unlimited. Studies are currently underway to install Airborne Laser Based Weapon and Target Simulator (the BT-46 universal pod unit) for future full integration of Dutch helicopter assets into 2 way tactical and gunnery training.

“Ever reducing budgets made us very aware of the life-cycle costs of operating this MCTC,“ Vermeulen explained, “and we have put great emphasis on this aspect in our contract negotiations which covers the total amount of € 90 Million Euro. It is equally divided between equipment supplies, like pyrotechniks, operational and logistic support such as storage, issue and receipt of training equipment, mounting of equipment, maintenance and repair for the next 15 year service life of the system.

With the troop trials now completed a number of comments cleaned from users of the system shows clearly the benefits of this kind of training. It provides realistic combined arms training focused on developing soldiers, leaders and units for success on current and future battlefields. It analyse the performance of each and every participant, factors that are vital in the maintenance of operational effectiveness. It prepares units to fight in high intensity conflicts and/or peace support operations. By using TES, units suffer realistic levels of casualties and have to improvise reactions to enemy action in combat conditions and continue to operate when key commanders and headquarters are put out of action. The soldier can imagine that he is in the middle of a very real battle, complete with the stresses and strains that this creates. Trainers will discover their strengths and weaknesses as they can no where else, except in real combat. The spinoff is that in future time can be better spent at the larger CTCs like GÜZ during level 5 exercises. Success on the battlefield depends on the skill, tactics and combined arms team work of the participating units.”

Polish Special Operations Units and the man in charge