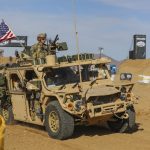 You are reading
Amerikaanse Special Forces doen mee in rally

PRIMM, Nevada – The sun burns hot over the Nevada desert as racers from all over the country line up custom-built off-road vehicles. An unusual sight is taking place at the end of the race line, and most racers cannot believe what they are seeing.

In a class of their own, on vehicles loaded with weapons and built to be more at home in a war zone, is an Operational Detachment Alpha special forces team.

Green Berets with the 5th Special Forces Group (Airborne) raced their Ground Mobility Vehicle 1.1s against vehicles specifically built for off-road racing, Mar 6, 2020, at the Mint 400, “the oldest and most prestigious off-road race in America.”

The starting flag first waved at this race in its birth year of 1968. What started as a public relations promotion for the Mint Hotel’s annual deer hunt soon escalated to what this historic race is today.

For such a long running race this will be the first time that an active duty military element has participated with actual military vehicles and the motivation was real.

“We are excited to see how we compete and see where we stack up with the industry professionals that are here,” said Capt. Eric, Operational Detachment Alpha commander, 5th SFG(A). “We have these vehicles loaded out how we would have them for combat and were excited to push their limits and see what they’re capable of.”

As qualified as the Green Beret Soldiers are, and as tested as their equipment gets in real-world wartime scenarios all over the world, their vehicles are not intended for the high intensity world of racing.

“These vehicles are not built as race vehicles, they are not built for speed, but we are looking to push the limit with them,” said Eric. “We’re constantly looking to develop ourselves and our equipment and anything we can do to take us outside our level of comfort is great for us.”

The other racers and fans warmly greeted the service members, racing Army vehicles, wearing Army gear, in Army uniforms, but this isn’t the first year that the military showed a presence in this historic race.

“Last year I had the opportunity to do this and raise a bit of funds for the Marine Raider Foundation,” said Col. Jody Lynch, commander of Marine Forces Special Operations Command. “Based on us doing that, we were approached by the race organizer himself and he asked if we would be willing to spread the word and try to create more of a military challenge and to get all of the services out here.”

As always, the 5th SFG(A) Green Berets were ready to meet that challenge.

“Because the word started to spread,” Lynch continued, “5th Group was able to put together a couple GMV 1.1s and get them out here fully kitted out to show the American people what we’re all about and what we look like when we’re out there fighting and defending this nation. I think it’s absolutely remarkable, it is exciting seeing this all come together.”

As a former Mint 400 Race Director and Vietnam Veteran, K.J. Howe, was ecstatic at the sight of the fully loaded GMVs.

“I’m just so happy the Race invited the people who provide our nation’s security, and especially the Special Forces guys because they work everywhere in the world, under every condition you could possibly think of, whether they have to jump out of a plane or come in on a raft they’re going to help defend our country,” said Howe. “I’m proud to be a veteran and I’m proud that the Mint 400 is honoring our veterans. We’ve had the Wounded Warrior program over the last four to five years, but this is even better.”

Howe continued, “You cannot win this race in the first mile, the first 20 miles or the first 40 miles… you want to finish.”

Overall, the team completed two 100-mile laps of the 400-mile course. They received an honorary finish award as most of their time on the course was spent assisting other racers by pulling them out when stuck, or even slowly towing other race vehicles through the remainder of a lap to be fixed in the pit.

That is what selfless service and being a Special Forces Operator are all about: seeing a need and taking direct action to help people. Regardless of how the team officially placed, they left with smiles and lessons learned.